Legend
Time for next gen nVidia speculation then

Moderator
Legend
Alpha
My speculation is it will be late.
F

Veteran
Damn, you're fast -- I was about to fire up that thread for "Kepler".

I guess it's too early for "Maxwell".

fellix said:
Damn, you're fast -- I was about to fire up that thread for "Kepler".

I guess it's too early for "Maxwell".
Click to expand...

Fast? I even went via photoshop in between
(and noticed afterwards that I had accidently zoomed out the video tab in ie9 so it's smaller than it should)
F

Kaotik said:
Time for next gen nVidia speculation then

edit:
mod could add tags, I forgot
Click to expand...

And Maxwell should be a 20nm chip.

Edit: in that slide Cypress would be just between Kepler and Fermi, at 2.8 DP Gigaflops per Watt

Focus is apparently on performance/watt with Kepler aimed to be 3-4 times more efficient..
R

Veteran
I could be wrong but the graph seems to show super linear growth in DP flops/W. I guess 2013 is when last call for ff hw goes out.

BRiT said:
My speculation is it will be late.
Click to expand...

rpg.314 said:
I could be wrong but the graph seems to show super linear growth in DP flops/W. I guess 2013 is when last call for ff hw goes out.

Kaotik said:
Time for next gen nVidia speculation then

This roadmap isn't correct. It was more like this: 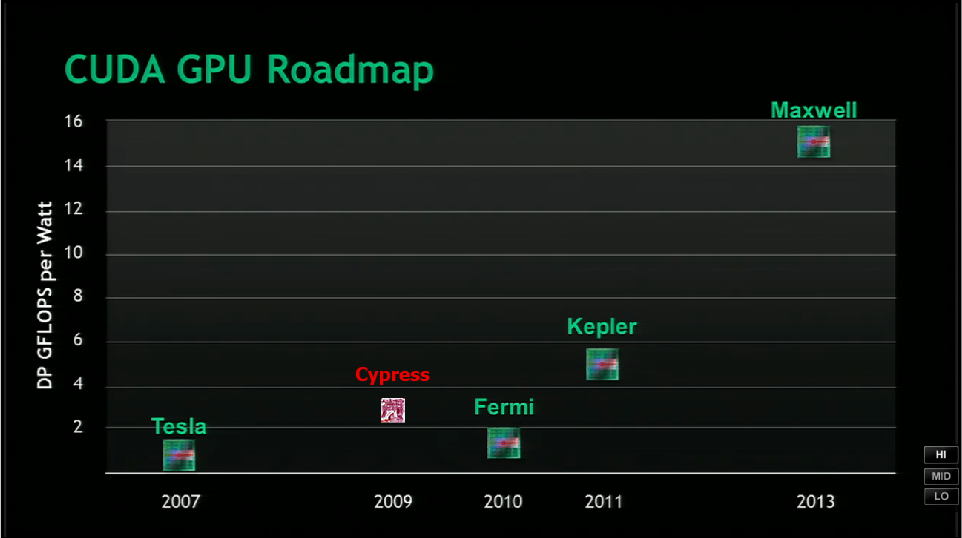 Looking forward to place Cayman in there
R

Is this a roadmap for power point slides or actual working boards with non-rebranded chips inside them?
S

And the hardware of their first Tesla generation was ready in November 2006 or April 2007.


digitalwanderer said:
And over-powered, and hot, and...
Click to expand...

Legend
Subscriber
FWIW:
http://en.wikipedia.org/wiki/Kepler
"Kepler also incorporated religious arguments and reasoning into his work, motivated by the religious conviction that God had created the world according to an intelligible plan that is accessible through the natural light of reason." and "As he indicated in the title, Kepler thought he had revealed God’s geometrical plan for the universe."

"Kepler claimed to have had an epiphany on July 19, 1595, while teaching in Graz, demonstrating the periodic conjunction of Saturn and Jupiter in the zodiac; he realized that regular polygons bound one inscribed and one circumscribed circle at definite ratios, which, he reasoned, might be the geometrical basis of the universe. After failing to find a unique arrangement of polygons that fit known astronomical observations (even with extra planets added to the system), Kepler began experimenting with 3-dimensional polyhedra."

Even more geometry? A Polymorph engine for each ALU perhaps? =)
S

I would say that a special version of Kepler will power PlayStation 4.
You must log in or register to reply here.

Monday at 9:51 AM
TopSpoiler
T
A
Nvidia: BlueField family of DPUs for data centers